In story, bland characters get lost.
Lose a character’s unique qualities, and you’re left
staring down at a conspicuous, gaping hole.

What goes into creating a dynamic character, intricately intertwined and imprinted into the story with passion and clarity?

I have some ideas.

* Make the character memorable. Okay, nothing new here. But how?

Most writers take the make it memorable part as giving your character the proverbial big nose, scar on the cheek, or limp. Memorable is not just a physical characteristic written into your character’s introductory description and never seen again. Something enduring has to stand out, to create individuality continuing across the page. There’s nothing worse for me than a reader saying, Now who’s this guy, again?

* Make the character quirk. I know, quirk is a noun. But I’m talking about exercising the quirk. (Let’s make quirk a verb, shall we?)

We all quirk. We say and do things that are, truth be told, a bit off. Whether it’s an OCD behavior or a slobbish moment…whether a way of speaking or a habit of pausing before we speak…we all have a “thing that we do.” Quirk away. But don’t get too bizarre. Use normal quirks. We all have ’em.

* Make each character speak differently. I’m not talking about giving your character a southern accent or broken English. It’s more.

I’m talking about short phrases vs. long phrases.
Formal vs. informal speech.
The line ending on a strong verb or ending on a preposition.

Speech tells us about the character, too.

* Give your character an object to interact with. I’m not talking about Gandalf’s staff. Think subtle. Objects tell about the person, and objects we carry often can show values and motivations.

What do you carry? I have the ever-present coffee cup. What does that say about me? Many things. Yes, I love the taste. But coffee is also part of my routine for waking, for writing, and for traveling back and forth with kids to dance lessons. I can’t stand to be cold, and coffee keeps me warm. More importantly, coffee is a part of my family’s culture.

Personal backstory…
I’m going to get personal, to make a point.

As a small child, I remember sitting with my mother at the morning table;
the just-perked silver pot of coffee on kitchen counter, poofing its breath of steam,
my mother cupping between her hands the mug of the just-poured syrupy black;
placing the cup with care on the freshly-wiped plastic tablecloth,
then scooching her chair tight to the edge,
her eyes stayed on the hot liquid
as if her intent gaze kept the cup in its place;
pouring cream from the skinny waxed-cardboard box that reminded me of school lunch milk
and stirring slowly,
deep in thought of things my small mind never knew (and will never know);
as I filled my cup with an inch of coffee, feeling grown up,
then adding milk to the rim,
then pouring sugar from a height too tall for her comfort,
making a miniature waterfall of granules wisping off the teaspoon;
stirring in movements echoing my mother’s slow arm,
creating “coffee milk,” to sip and savor.

As an adult, I remember standing in the kitchen
— always the kitchen —
with my oldest brother and siblings
at family events, at holidays,
between laughter and philosophy,
cradling various ceramic cups in hands, brewing pot after pot,
stretching time;
my oldest brother’s laughter rippling between the “ha!”
his head thrown back, smile wide, head nodding, eyes split-second closed
to a silent laugh so infectious it brought tears to the corners of our eyes;
of his carefully-chosen words between sips, tasting lips,
his mm-hmms and the crinkled corners of his listening eyes, intent.

The last time I saw my brother, before the accident,
it was in a kitchen, with coffee mug between his hands.

You see, for me, coffee is more than a drink.
Coffee embodies meaningful relationship.

Your character has something like coffee,
doesn’t he? Doesn’t she?

A characteristic.
An action.
An object.
A connection to history particular to him, to her, creating depth and intrigue
(most likely simple,
yet filled with meaning). 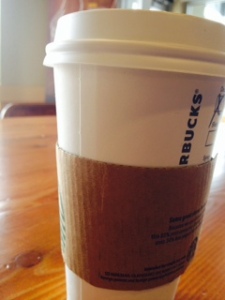